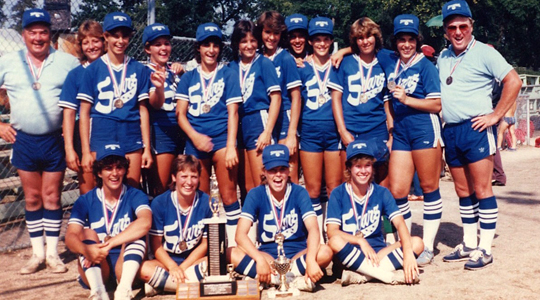 The North Delta Stars, proudly coached by Jim Biggan and John Donaldson, was another powerhouse to emerge for the North Delta Minor Softball Association. The team was formed in 1983 and remained together for the next 7 years as the girls moved from the Bantam division all the way through Jr. Women’s.

By 1984, it was evident that the North Delta Stars were a very competitive team. That year, they went 13 – 1 in league play and won Provincials. At the Bantam division, it was the first opportunity to compete at the Western Canadian Championships in Portage la Prairie, Manitoba. The Stars brought home the gold medal, along various hilarious off-field stories and memories. That year was instrumental in solidifying the core of the team to remain together and play for each other throughout their teenage years.

In 1985 and 1987, the Stars had to settle for a silver medal at Provincials losing to their arch-rivals (and friends) the North Delta Animals who were the older team. This rivalry continued for years!

Jim Biggan and John Donaldson spent many hours at the field trying to teach and challenge the girls to become better with each outing. Once the team moved up to Jr. Womens’s, John Donaldson retired and Laura Houle and Heather Cranston stepped in as assistant coaches. Obviously, they were very good coaches as the North Delta Stars won Provincials again in 1986 (Midget), 1988 and 1989 (Jr. Women’s). The 1989 Provincial gold was especially sweet as the Stars beat the North Delta Animals twice during the tournament (one game took 18 innings to be decided!). As Provincial champions in each of those 3 years, the Stars went on to compete at the Canadian National Championships, finishing as silver medalists each time (1986 Lloydminster, 1988 St. Catherine’s, 1989 Kitchener). To go along with the highlights of competing at Provincial and National championships, the Stars competed in many local and US tournaments, often finishing as the champions. In 1987, 3 of the girls were selected for the Canadian Jr. National team to compete at the ISF Jr World Championships.

Jim Biggan readily acknowledges that he had a very good group of young women with great potential that he asked the girls to prove each time they took the field. Behind the scenes, there were an equally great number of parents who scouted, cheered, entertained and supported the on-field product. “It was a lot of fun to coach and we enjoyed many great times both on and off the field,” commented Jim, “our girls and parents were world class.”