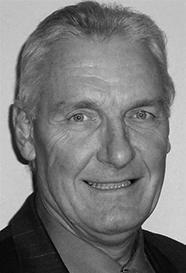 Mike Hawkes has lived in Tsawwassen and been involved as a volunteer with tennis operations at the Tsawwassen Tennis Club since 1986. Whether it is serving on the executive, organizing social events or maintaining the grounds, Mike has always been available to lend a hand.

Soon after joining the tennis club, Mike volunteered to complete minor chores leading to a five year stint as Maintenance Director. After recovering from a spinal injury, Mike continued his role in maintenance. Starting in 2005, Mike was Vice-President, President and Past President of the tennis club. Mike then resumed his role in maintenance with the assistance of another member. He oversees the continued upkeep of the courts, procurement of materials as well as all contract work on the courts and surrounding areas.

He was involved in reviving the annual Christmas dances and was the driving force behind the club’s 40th anniversary in 2007. As well, Mike initiated an annual reciprocal friendly tennis day with the Sunshine Tennis Club. This year, Mike collaborated on a member survey which led to changes at the club and the resurrection of the Friday Night Socials.

Beyond the tennis community, Mike has extended his volunteer efforts. He is a blood donor, having given blood 325 times starting in 1970 and continuing until today. At one point, he was the number one blood donor in British Columbia. In 2005, Mike raised and trained a guide dog for the BC Guide Dog Association and has filled in temporarily over the last ten years to raise other dogs. He sponsors a guide dog yearly and supports the work of BC Guide Dog.

Mike was with the RCMP for thirty years and then spent five years with ICBC as a Special Investigator. Since retiring Mike has developed a passion for biking and regularly plays golf and pickleball. Mike’s tennis playing days are limited now, but he still enjoys a chance to get out on the court. As well, Mike and his wife enjoy travelling and watching their grandchildren grow up.

According to club members and passersby it is not uncommon to see Mike on his hands and knees in the club garden or repairing cracks in the tennis courts. For his commitment and dedication to the Tsawwassen Tennis Club, Mike Hawkes is the Delta Sports Hall of Fame Volunteer of the Year.