Master Athlete of the Year Track and Field 2010 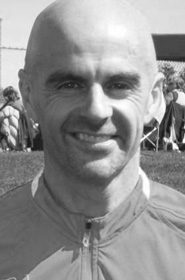 Malcolm Smillie has been an elite middle distance runner as a Masters Track athlete since turning Masters in 2000. Last July, he continued his dominance of these events at the Provincial Masters Track and Field Championships in Nanaimo. Not only did he win the 800 and 1500 meters to remain the Provincial Masters Champion, but also he has won these two events in the 40-44 and 45-49 age groups for the past ten years. This has resulted in ten consecutive double titles. At 49, Malcolm Smillie is in the final year of the 45-49 age class.

Growing up in Scotland, Malcolm was an accomplished soccer player when he decided to run in competitive track at 19 and entered the 800 meters at the Highland Games. He did not perform well. Rather than returning to soccer, he chose to challenge himself and became one of Scotland’s top runners by his early 20’s. Unfortunately, when he was at his peak he had to compete against premier middle distance runners in Great Britain like Sebastian Coe, Steve Kram and Steve Ovett. However, he was good enough to earn a scholarship to the University of South Carolina, where he competed in the school’s track and cross-country programs.