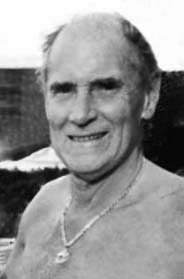 John Service was a well known swimming coach in South Delta and founded the Winskill Otters Masters Swim Club in 1987. Born in Scotland in 1930, John was a gifted athlete who trained hard to develop as an elite swimmer. As a young man he excelled in his sport, winning countless awards and medals at local, national and international levels. He was a member of the British swim team from 1946 to 1949, competing in the European Games in 1947 at Monte Carlo and as an Olympian in London in 1948. He represented Scotland at the 1954 British Empire Games in Vancouver. Competing in the 200 yards Breast Stroke, he finished fifth, while his 3 x 110 yards Medley Team won a Bronze Medal. He was the Scottish and British record holder in the 100 and 200 meter breast stroke from 1946 until well after 1955, when he and his wife immigrated to British Columbia.

In 1984, after a 35 year hiatus, John Service joined the UBC Masters Swim Club. He immediately became the BC and Canadian record holder in the 50, 100 and 200 meter breast stroke events for his age group. In 1985 and 1986, he set the long and short course records in all the breast stroke events, with the exception being the 100 meter long course. He was recognized for his achievements in 1986 by being named BC Athlete of the Year.

With the intention and desire to share his passion for swimming with others, John Service launched the Winskill Otters Masters Swim Club in 1987. He drew on his years of experience as a swimmer as well as his coaching days with the Royal Air Force in the early 1950s. The program fostered the feeling that keeping fit was enjoyable. In the beginning, John donated the money for the rental of the swimming lanes at Winskill Aquatic Centre and was not remunerated as a coach until the program was firmly established. He was considered a great coach and competitor, always encouraging and interested in you as an individual. Out of the water and off the pool deck, John Service encouraged comradeship and helped establish the club as a close-knit group. The Winskill Otters Masters Swim Club today has 3 coaches and has emerged as a very active organization.

John passed away unexpectedly in 1996. He is remembered by all those who knew him as a great friend, coach and mentor over an extended period of time, not only in BC and Canada, but also abroad. He gave everyone so much to celebrate and be thankful for. In memory of John Service, the family established a prize to be awarded to a meritorious UBC undergraduate or graduate student in his memory.