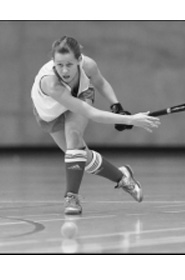 Jackie Trautman is a sophomore at the University of Alberta in the faculty of Science and plays for the Golden Bears. She grew up in North Delta graduating from Sands Secondary in 2008. Even though Jackie played a variety of sports while growing up, her passion and accomplishments have been in field hockey. In 2008, she was selected as one of Delta’s Youth Athletes of the Year and went on to become the Canada West Rookie of the Year in Field Hockey.

This past year has been a truly amazing one for Jackie. In February 2009, Jackie was a recipient of the Premier’s Athletic Award which recognizes the top male and female athletes who demonstrate the potential and commitment to represent British Columbia and Canada in athletic competitions. Jackie was selected to the Canadian National Field Hockey Team in June 2009 and received her first two International caps at the Champions Challenge Tournament in Russia. Upon her return to British Columbia, she re-joined the Senior BC team which won the gold medal at the Senior Nationals in Calgary.

This fall, Jackie once again played for the University of Alberta Golden Bears and as a defender she was her team’s leading scorer and second in scoring in the Canada West. Jackie was named 2009-2010 Canada West Player of the Year, selected to Canada West All-Star team and prior to the CIS Championships chosen to the All Canadian team. The Golden Bears finished second at the CIS Championships with Jackie being selected to CIS Tournament XI.

Jackie’s leadership, mental and physical toughness and competitive nature make her an asset to every team she plays on. This summer she will continue to train with the National team.