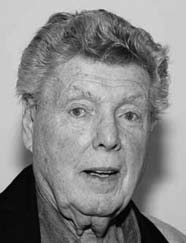 Harry Jenkins has been a long-time resident of Delta, spanning some 45+ years. As a trainer for more than 35 years, beginning with Seafair Junior B Hockey and the Richmond Sockeyes Junior A Hockey Team in the mid to late 1970s, Harry has been associated in the same capacity with the Ladner Bruins Hockey Club since the early 1980s. The Ladner Bruins are a local club, originating in the early 1970s. The team, comprised of mostly former junior players living locally, continue to play a 44+ game schedule, including up to four CARHA tournaments each year. During this time, the Bruins have recorded numerous championships, including the Pacific Cup, Western Regional CARHA and represented Delta as one of the over 100+ competitive teams in the World Cup, hosted locally in 2000. At 84 years of age, Harry Jenkins has not missed a tournament, demonstrating superior devotion and commitment. Attending early for every game, he brings his healing skills, positive outlook and black trainer’s box.

Due to his extraordinary volunteer dedication as a trainer, Harry Jenkins has contributed immensely to supporting the various players and individuals of the Ladner Bruins, enabling them to play and stay together as a successful competitive team. As a positive role model, his example has encouraged team members to be active in the community, developing as individuals, staying healthy and contributing to the community as peers, parents and coaches. To this day, the Ladner Bruins continue to be involved with fundraising efforts and host an annual golf tournament where part of the proceeds are directed toward worthy causes in the community.

The Ladner Bruins Hockey Club is indebted to Harry Jenkins for his support and contribution as a trainer and personal friend for many years. From the standpoint of longevity, his devotion to an organization is truly unique and somewhat unparalleled in today’s world. His demonstration of character, reliability and commitment qualify him as a worthy Builder Inductee into the Delta Sports Hall of Fame.