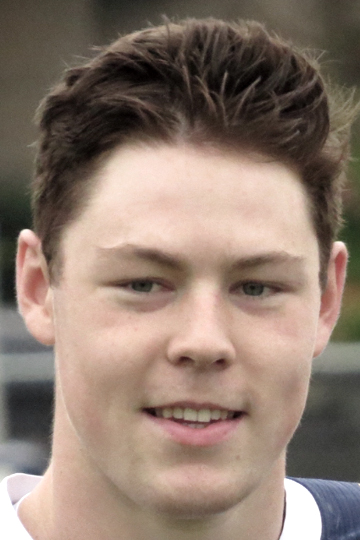 Grant McDonald, 2017 graduate of South Delta Secondary, has begun the next chapter of his football career at the University of Maine this fall. Grant started playing with the Delta Rams when he was nine years old and it took off from there. Football was not the only sport Grant played. He was also an avid Lacrosse player. When asked why he chose football, Grant felt it was where he had the most skill and promise.

After the Rams, Grant found many successes playing for the South Delta Sun Devils, as a starting linebacker and running back. In 2014 Grant was a major contributor to the team’s AAA Provincial Championship win. Grant scored two touchdowns in the final game and was awarded game MVP. This Provincial Championship is a highlight for Grant, as he reflects back on his high school career. “The team, the coaching, everything about that year was so great to be a part of.”

The years that followed did not disappoint. In 2015, Grant held impressive stats such as both a running back and a linebacker. He led the province with 9.2 yards per carry, was the number two rusher with 1,217 yards and 16 touchdowns, and led in tackles with 103. In his senior year, he was sidelined by an ankle injury early in the season, but recovered in time to help the team make the provincial semifinal, resulting in a 22-21 loss to Terry Fox. Grant was awarded South Delta Secondary’s ‘Sportsperson of the Year’ honours this past June.

Grant is settling in with his new team at the University of Maine as well as his new position as tight end for the Black Bears. He embraces the challenge and is looking forward to a rewarding experience, both on the field and in the classroom. Grant’s would like to pursue a professional career in football, but is also focused on his studies in sports medicine and kinesiology.

What Grant has appreciated the most as he transitions to Maine is the consistency of message from his new coaching staff that reflects similar values to his previous coaches at SDSS. All of his coaches have stressed the notion of developing the whole person and having a strong work ethic, two things Grant has proven to live by.