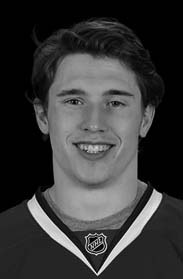 According to Vancouver Giants Coach Don Hay, four little words have big meaning for pint-sized Brendan Gallagher. When asked about the on-ice abilities of the 5-foot-9, 163-pound winger, Coach Hay referred to him as a “really smart, young guy.” Simple enough, it would seem. Hay doesn’t throw around compliments like that very often, although, considering the way he admires players who can stick to schemes and play systems, it would suggest that Gallagher, 17, is one of the leading players on the Vancouver roster. “He really understands the game well,” said Hay. “And he’s been a hard-working kid at every level he’s played. He’s not going to change that.” Everybody loves flashy skill and the scrappy, little bulldog nature as well. He chases after the puck with reckless abandon when he doesn’t have it and he’s come across as fearless. He also has the wheels and the tenacity to be an adept penalty killer and forechecker.

Brendan Gallagher, a ninth-round pick in the 2007 WHL bantam draft, is a product of the South Delta Minor Hockey Association. His first year with the Vancouver Giants was 2008-2009, where he was often used in a high energy role. However, he still finished the season with some encouraging offensive statistics. This year with the Giants has been his breakout season. He has been identified among the top North American prospects for the 2010 NHL Entry Draft, earning a 152nd ranking, by the Central Scouting Bureau. At the end of the regular season, Brendan had 41 goals and 40 assists. This is a significant achievement, considering that only three players in Vancouver Giants history have scored 40 or more goals. After six games in the playoffs, Brendan had 8 goals and 7 assists.

From all reports, Brendan Gallagher is a person of real solid character. Not only is he a rapidly improving hockey player, but also he possesses strong academic skills. A very promising future is predicted for Brendan. Regarding his size, he has stated “I’ve heard that I’m too small all the way along.” He ignores it and concentrates on expanding his role. We should recall the case of Tampa Bay’s Martin St Louis, who is an established NHL star.