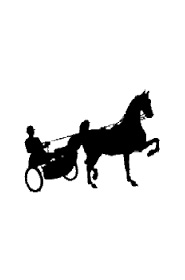 Albert Huff, a lifetime resident of Ladner, was responsible for the re-birth and continued success of harness racing at Paterson Park in Ladner after the Second World War. Born in Ladner in 1895, Albert grew up farming in East Delta. The Huff’s were a prominent Delta family. Albert’s father, Seymour, sat on Delta’s Municipal Council for nearly twenty years, spanning the time frame between 1904-1941. As a young man Albert spent 4 years in the First World War before returning to Delta to start a family and a career. He did just that, and by 1942 he was a successful farmer, trucker and father of two. He had also followed in his father’s footsteps and had been elected to the Municipal Council. He would hold that seat for the next 17 years while never missing a meeting.

After the Second World War, Huff decided he was “out to get racing going again in Ladner.” All the way back to before World War One years, Paterson Park had been used for harness racing. A man named Ralph Coleman had outlined the track at that location but there was nothing more than a tramped down loop for the racing to take place.

In 1948, Huff, a lifelong lover of horses, headed the group that would bring racing back to Ladner in a much bigger way. First, as a founding member of the Delta Riding Club, he signed the club’s constitution into being on April 21, 1948, which is still used today. One month later, on the May Long Weekend, the horses ran for the first time at the re-furbished Paterson Park. Over the next 20 years the horses would continue to run faster and more professionally than they had in the past. Paterson Park continued to grow, adding floodlights, betting machines, and a roofed grandstand. The local farmers did what they could to make the track as pristine as possible as they attracted competition from around the Lower Mainland, Fraser Valley and United States. Huff himself travelled around the Western States competing with his stable of horses.

In 2008, Albert Huff was recognized by the BC Standardbred Harness Racing Hall of Fame for his enormous contribution to the sport. He continued his commitment to Harness Racing right up to his death in 1967 at 73 years of age, rarely missing a day at the stables with his horses.

Huff was a dedicated Delta man, spending his time towards the bettering of the Municipality in all things. He was a man dedicated to service, clearly visible through his time spent in both the First World War and on Council, but also in being the driving force behind the re-invention of Harness Racing in Delta. For all of his hard work Albert Huff was honoured with the Delta Citizen of the Year Award in 1966.